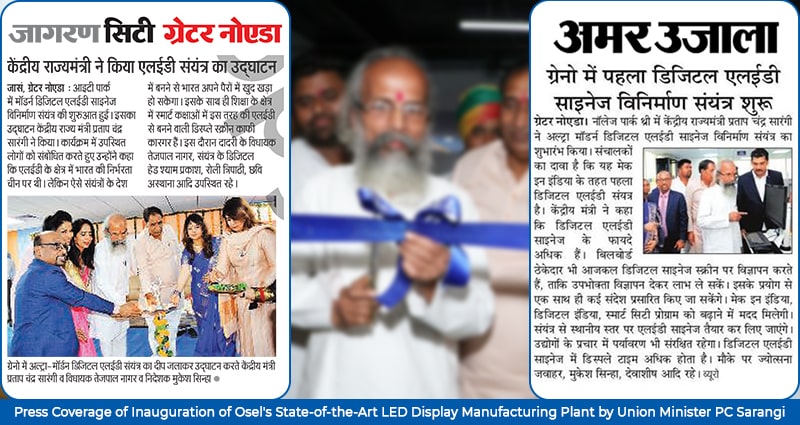 Ösel’s, new state-of-the-art LED display plant was inaugurated recently in Greater Noida by the Union Minister of State for Micro, Small and Medium Enterprises and Animal Husbandry, Dairying and Fisheries, Mr. Pratap Chandra Sarangi. This is a major step undertaken by Ösel to provide a vital boost to the country’s flagship ‘Make in India’, ‘Digital India’ and ‘Elimination of Single Use Plastic’ programs. The event was widely covered by the mainstream press like Amar Ujala and Dainik Jagaran among others, who analysed the benefits that this plant will bring to the LED display market in the country.

Why India needs to shift to LED display screens

Unlike static flex screens that can display just one ad on one screen at a time, multiple ads can be accommodated on a single LED display board. The display space is therefore underutilized, which results in much higher display cost for the advertisers as they have to buy the display space for at least 30 days. An LED screen in this situation, allows a major scale up of operations as it can display multiple ads of multiple clients. This way it generates much higher revenue for a single display space and much lower display cost for the advertiser.

Ösel’s new venture is a boost for self-reliance

Ösel’s new state-of-the-art manufacturing unit for LED display screens has provided the government’s flagship Make in India Program, a great boost. This is a new beginning in a market that was entirely dependent on costly imports and complex servicing support. The display space owners can now expect world-class LED display panels at reasonable prices. This will allow them to accommodate many more ad displays on a single screen and offer reasonable display space prices to advertisers, which will benefit end users.

The Indian large format display screens market is almost entirely dominated by static PVC flex signage screens that are made from polymer fibre. This is a single use plastic (SUP) material that can display just one message on one screen, which is disposed of at the end of the display duration of at least 30 days for such screens. India’s production of PVC flex is around 1.4 billion square feet every month in addition to import of 690 million square feet. That means, India disposes over 2 billion square feet of PVC flex every month, which adds significantly to the already serious level of SUP pollution in the country.

Osel Tech is today among the few original equipment manufacturers (OEMs) of LED display screens in India and boasts of the country’s first and most advanced manufacturing plant with state-of-the-art features. This will boost indigenization of LED display manufacturing in India and make it easier for the out of home (OOH) display space owners to adopt LED display systems. As it allows them to display multiple ads of multiple clients on a single screen, multiple times, their revenue-earning potential of OOH display space owners also increases manifold.