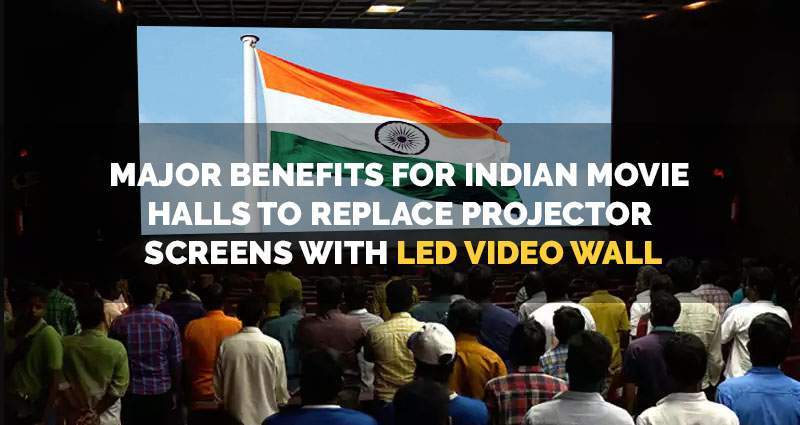 The movie theatre industry in India is grossly under-utilized with regard to the volume of content or number of films at its disposal for display. There are around 13,000 screens across the country out of which, around 10,000 are in single screen movie halls that have the outdated projector-based mode of operation. A digital LED video wall can solve a lot of problems that are responsible for under-utilization of content as well as the severely limited number of screens in the country. The traditional single screen movie halls that form the bulk of the operational screens in India must give way to multiplexes for the businesses to thrive and survive.

Why Digital LED Screen is Superior to Projector Screens

Visiting a Movie Hall is a Different Experience Today

A movie hall should offer an all-round experience of the kind found in the multiplexes – multiple screens, food court, amusement zone for kids and high quality rest rooms among others. Most people in the major cities no longer grapple with each other for tickets to watch a movie because it’s not possible or required in a multiplex environment and also people are more affluent and have many options today. Operating a multiplex with multiple screens can’t be done with projector-based screens; an Indoor LED video wall is the best option to run such an operation because of the ease and efficiency it offers.

Huge Scope of Growth in The Indian Multiplex Segment

There is just one screen for every one lakh people in India against one screen for every 8,000 people in the US and for every 42,000 people in China respectively. Developing multiplexes and installing LED video wall screens will help India improve on that average in the years ahead. The Indian film industry is the largest in the world in terms of content or the number of films produced every year – it ranges around 2,000 annually. No other country comes anywhere near this figure in terms of the number of films produced and yet, the Indian film industry’s gross revenue is just one-tenth of what it is in North America and one-third of China.

The success story of the multiplex segment in India holds out a promise of much better growth in future. This proves that the middle classes in India enjoy going out to the multiplexes with their families and enjoy the different experiences on offer. Right now this is confined to a few major cities and it leaves out the vast hinterland of small town India where the craze for films have always been very high. Multiplexes equipped with LED video wall screens will experience exponential growth if they can tap the small town crowd.