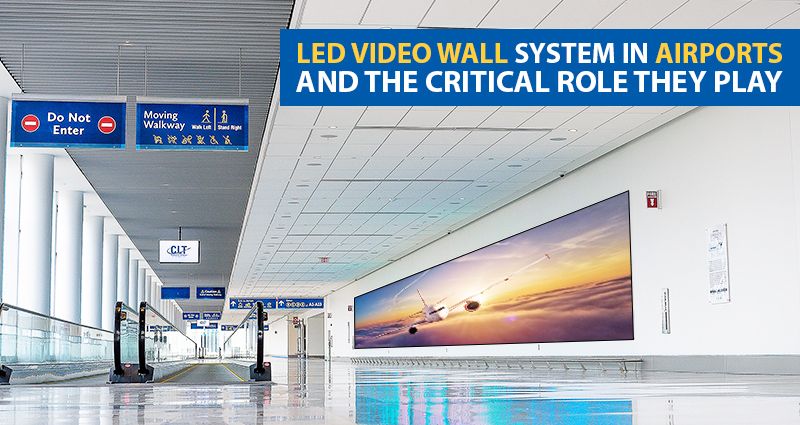 The use of digital displays in airports is increasing in India at a remarkable speed and it is setting an example for the transit stations of other modes of transport like railways and bus services. Air travel represents the most premium transportation service and hence airports are the first to introduce the most advanced equipment and installations in their premises. The most well-to-do folks of the world pay high prices to transit through airports and hence there is a need to maintain them in great shape. When the LED video wall system first came into the market, the airports were among the first to implement this excellent display screen.

Air travel in India is growing at an exponential rate and according to International Air Transport Association (IATA) estimates, India has the fastest-growing domestic air travel market in the world for the 4th year running. This means, the amount of flight information has also increased proportionately and manually operated display boards are no longer effective in coping with the increasing updates. An LED video wall system will easily meet the requirement of displaying updated fight information in real time.

Most air travellers are well-to-do individuals with substantial disposable incomes and hence, are sought after by different brands that spend huge amounts on advertising. An airport video wall display invariably offers higher display rates and there are many premium brands that are willing and ready to pay such rates. Therefore, LED display screens in airports can be a good source of steady and sustainable revenue for airport managements. The brands advertising on LED displays in airports are also able to gain a lot of mileage.

The control rooms in airports are among the busiest hubs handling critical flight data that requires improved integration and collaboration due to the growing number of flights, lower slot times and overcrowded skies. Managing such high volume data in real time requires LED video wall display solutions as conventional screens are inadequate for such sophisticated operations. On the other hand, LED displays in passenger waiting halls serve multiple purposes like entertainment for travellers waiting for their flights along with advertisements displayed at regular intervals.